“It’s just a boxing match,” Tyson Fury had tried to play it down beforehand but his third fight with Deontay Wilder was so, so much more. It was a battle for survival by the time it finally ended in the 11th round, less about sport and championships and more about each man’s incredible capacity to persist.

By the time they were surrounded by swarms of bodies inside the ring, Fury aloft in the corner in celebration and Wilder on the canvas, this heavyweight title fight had become a classic that was so good, so enthralling, so captivating that even the loser leaves with his reputation enhanced.

As for the winner? “I’m now the greatest heavyweight of my era,” Fury claimed and on Saturday night and the days that follow it is impossible to argue that he has outlasted his rivals to reach the promised land. There are more chapters to be written in this generation of heavyweight boxing but Fury’s excellence is already guaranteed to stand the test of time, whatever else he accomplishes now will be a bonus.

He entered this trilogy fight as overwhelming favourite because of how he manhandled Wilder in a one-sided second fight, 18 months ago. It was widely expected that Fury would not need to produce a performance as scintillating as that, but this fight turned out much differently and asked far more visceral questions of the champion.

His unequivocal answer to those problems is what cements his legacy.

A truly brutal fight of five knock-downs, two apiece until Wilder was mercilessly slammed to the floor for the final time, will take a piece of both men’s souls. They say boxers share something special when they step into a ring together, and that is certainly true on nights like this. Fury and Wilder will be spoken about in the same sentence for years to come. They will never forget each other, they will wear scars inflicted by their rival forever.

Muhammad Ali used to speak of dance partners and, in order to truly establish Fury’s greatness, he needed someone to match his moves.

What made Fury’s effort so special was the fact that Wilder did exactly what he needed to do to win the fight himself. He landed the big right hand. His punch. He landed it with force and with abandon, and it rocked Fury to his very core and took him off his feet. Moments later, Fury was down again. This is the territory that Wilder has made his name in, yet still Fury would not stay down.

This was a punch from Wilder which would have knocked out 99 percent of the heavyweight division.

That Fury has been clattered so savagely to the canvas four times across their three fights by one of the heaviest punchers in boxing history, yet emerged unbeaten, is stunning before you even factor in his own offence.

😈 “I pulverised her for four rounds!”

What is the truth? Inside-story to the @Savmarshall1 @Claressashields sparring session that you didn’t know about…

Wilder’s night will be defined by his astounding bravery and his iron will which should go a long way to mitigate the bizarre reasons he gave for losing their previous fight. Don’t remember those words, remember how Wilder behaved entering a fight against the only man to beat him, then getting knocked down twice, then finally clinging on desperately when the end was nigh.

Wilder refused to draw a line under this genuinely nasty rivalry after the final bell, refuting a show of respect. But he has, for far too long, been overlooked for his part in the excitement of this modern heavyweight era, chastised for relying solely upon his right hand as if trying to use the biggest knockout weapon in the sport is somehow morally unethical. Wilder has always been, and continues to be, a must-watch every time he steps between the ropes.

He chased all-time greatness and fell a step short. Fury’s ceiling is even higher.

A fearsome fighter who overcomes all odds, seemingly indestructible and a dapper dresser who can belt out a decent tune too? If they’re still looking for a new Bond they could do worse than Fury. 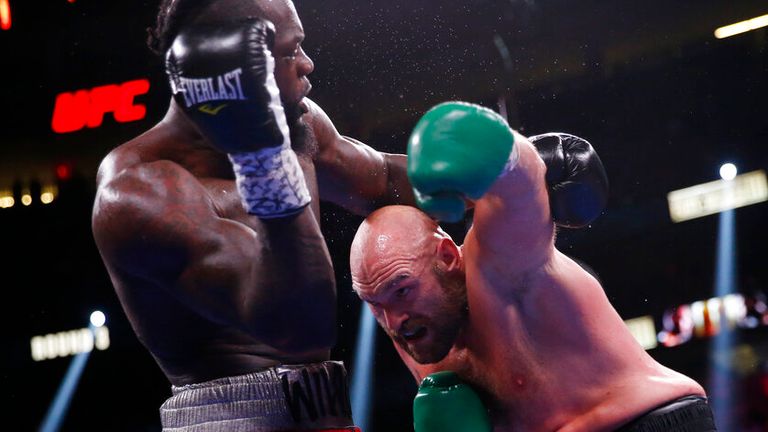 On the evidence of his trilogy with Wilder he won’t ever lose a fight but the cruel reality of boxing is that Fury will age too, he will also feel the after-effects of digging so deep to preserve his reign as WBC champion.

The fight with Anthony Joshua that was recently a dream but now feels like a foggy hangover will happen eventually. The rollercoaster they both exist on now appears to suggest Joshua has no chance, but times change and the ebbs and flows of this sport will deliver these two in the same ring one day. Imagine the thrill of Joshua vying to finally end Fury’s undefeated record in a packed-out British stadium.

Oleksandr Usyk, the new IBF, WBA and WBO champion, becomes the opponent for an undisputed title fight if he can remain unbeaten through a planned rematch with Joshua. 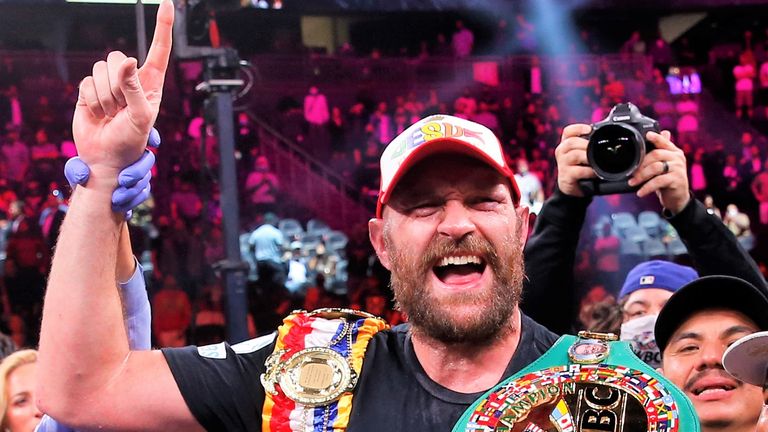 Dillian Whyte will become Fury’s mandatory challenger and could finally vie for a world title for the first time if he beats Otto Wallin, the southpaw who once gave Fury fits by badly cutting him.

“I’m No 1. Look at what I’ve done,” Fury bellowed post-fight, shortly before spending the rest of his Saturday night in Vegas in a nightclub with superstar DJ Steve Aoki in a celebration fit for the ‘Gypsy King’.

This is his time, the leader of a truly compelling era of heavyweights.